The Polaris RZR Pro XP® is the new generation in the RZR side by side family. At HMF, we were able to get our hands on one relatively early to start our research and development process for both exhausts and equipment. Initially, it appeared that existing HMF exhaust systems were going to be a direct transfer from previous RZR Turbos. However, closer inspection revealed some changes were going to be needed because the rest of the machine was different. So, the team went right to work, developing new bumpers and equipment, that would fit the new chassis, complement the modern styling, and still offer protection our customers have come to expect.

Exhaust
After a lot of measuring and fitting, our R&D team came up with four different muffler systems for the RZR Pro XP®. Our proven design and fabrication skills developed the following systems are now available for the machine: 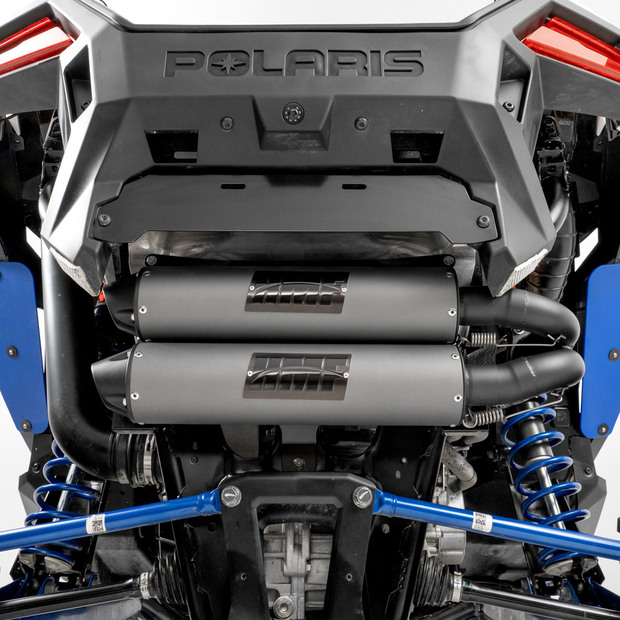 Performance Series Dual Slip-Ons
The restrictive factory silencer leaves a lot to be desired in the sound department. Our dual slip-on system quickly solves this. The Performance Series has the signature sound HMF has become world-renowned for. 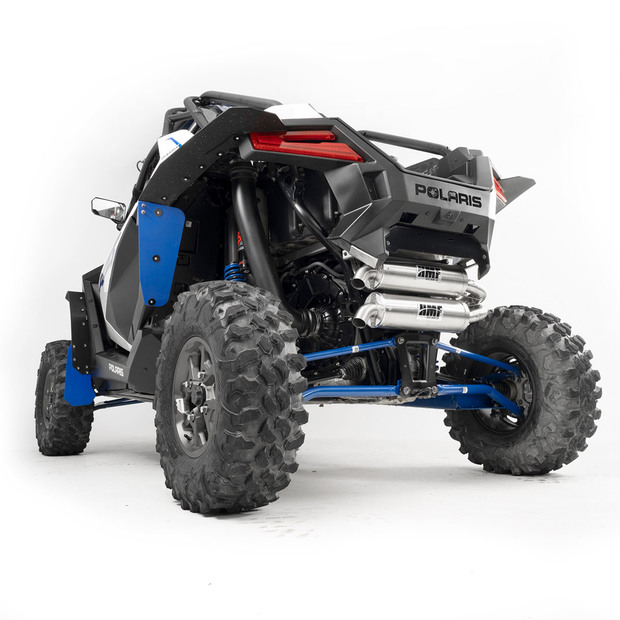 Using the unique internal core designs of the Titan Series, the Dual Turbo-Back Exhaust in our Loud (XL), or Quiet (QS) cores, tailoring the sound output to each user's liking. Our XL cores produce a deep tone with a hearty bark that will surely get some attention. The QS cores provide sound levels closer to stock, yet still giving a rich, deep tone without any of the undesirable secondary harmonics typically in the stock and other systems. The Titan Exhausts are made entirely from stainless steel, designed to last and require minimal maintenance.

This exhaust means business. Leveraging the durability of our Titan Series with years of racing knowledge, the Big Core setup is a real monster of an exhaust. The system is actually the shortest and least restrictive, even compared to dual silencer setups. This is thanks to the short overall length and unrestricted 2.5" downpipe with a silencer core. While it is hard to measure without costly and complicated testing equipment, the Titan Big Core most definitely gets the turbocharger spooled up faster with less backpressure. Some say their machine speaks to them. The Titan Series Big Core Turbo-Back exhaust from HMF on the RZR Pro XP® does way more than speaks: it shouts.

Tuning
Polaris® claims 181 horsepower out of its engine in the RZR Pro XP. This is, of course, the engine power at the crankshaft. The actual horsepower to the wheels is a lower number due to losses in the clutching, gearing, and driveline.

On our dyno, we measured the horsepower and torque at the wheels at 134 hp and 86 ft-lbs. This is running the machine in high gear and four-wheel drive to get the most accurate numbers possible. Other dynos and tuners may claim different/higher horsepower numbers, and that simply doesn't matter. What matters is the relative gains achieved.

After installing an exhaust on the Pro XP®, we immediately saw some gains in power. Power gains with just an exhaust were about 3 hp, again, measured at the wheels. During this initial testing, we closely monitor temperatures, air-fuel ratios, and other factors so that we know whether a machine is going to require tuning. In the case of the Pro XP, everything remained safe and stable, thus tuning is not an absolute requirement.

With the initial testing complete, it comes time to tune the machine and see what hidden potential can be unlocked. Using the DynoJet PowerVision 3, we were able to safely achieve 151 hp and 92 ft-lbs of torque (+17 hp and +6 ft-lbs). Even we were impressed with the capability of this machine to pick up 12% more hp with just an exhaust and tuner.

The tune we are offering works on every exhaust system and is the exact same tune developed to achieve the numbers we just mentioned. No secret tunes or settings, and no worries about losing any reliability.

Equipment
The new saying around HMF regarding our equipment is "Equipped to Perform." Our equipment lineup has expanded over the years from just a few simple bumpers on race quads, to full-blown offerings to accessorize the most popular off-road machines on the market. "Equipped to Perform" was born out of a desire to make the best and most practical use of each rider/driver's vehicle. That means more than just a bumper to protect against the occasional branch scrape or bump on the trail. We aim to offer essential accessories to make every ride or job a connection with man and machine, working in harmony to get you where you want to go, better than a stock machine could do alone.

Whether you need a lightweight bumper in the dunes or a heavy-duty, full-coverage bumper with a winch mount on the job, our Defender Front Bumpers are the premium choice. Rock Sliders are available for keeping the side of the vehicle from hanging up on the rocks, and Cargo Racks keep cargo and gear in place. Whatever the objective, we are always working on designing new accessories to make the journey more enjoyable.

For the Polaris RZR Pro XP®, the team has developed a full line of equipment and accessories.  Just about everything is new and different on the Pro XP when compared to RZRs of the past. That means all of the Equipment we developed, had to go through multiple stages of prototyping and finishing to ensure we the same level of quality and fitment as prior Equipment lineups.

Two front bumpers, the HD and U4, are available for the RZR Pro XP®. 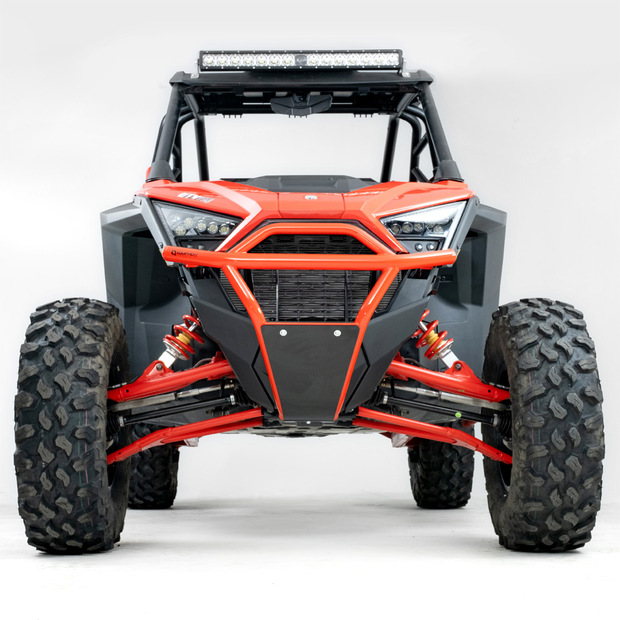 The Defender HD Front Bumper offers full coverage for the front of the RZR, including critical features like an included skid plate, heavy-duty materials, and top-notch construction.  All of this while following and complimenting the body lines of the machine. The Defender HD Front Bumper is made specifically for the Pro XP and is a must for any owner that wants enhanced protection while keeping bulk down to a minimum. 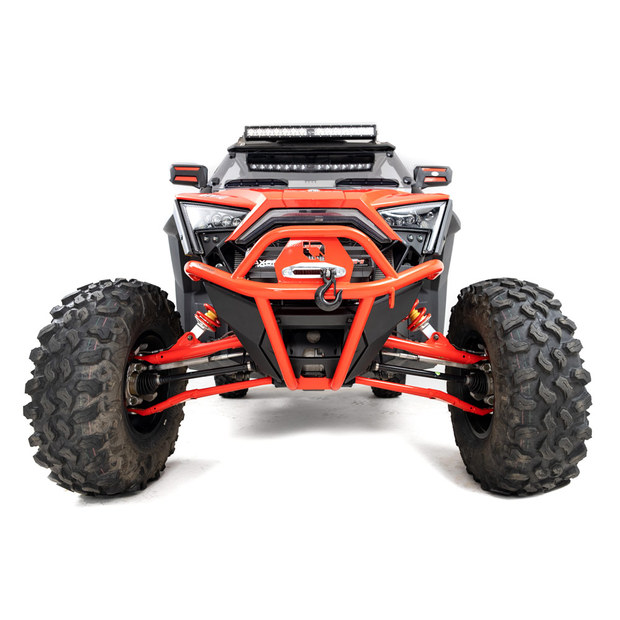 When it comes to rear bumpers our philosophy is simple: protect the rear of the vehicle, install easily, and look good.  No overcomplication here, just a well-built, good looking Defender Rear Bumper that fits the Pro XP perfectly. On this particular setup, we ditched the bulky rear plastic fascia that covered the factory silencer and included a license plate bracket that accepts both standard and motorcycle size license plates. 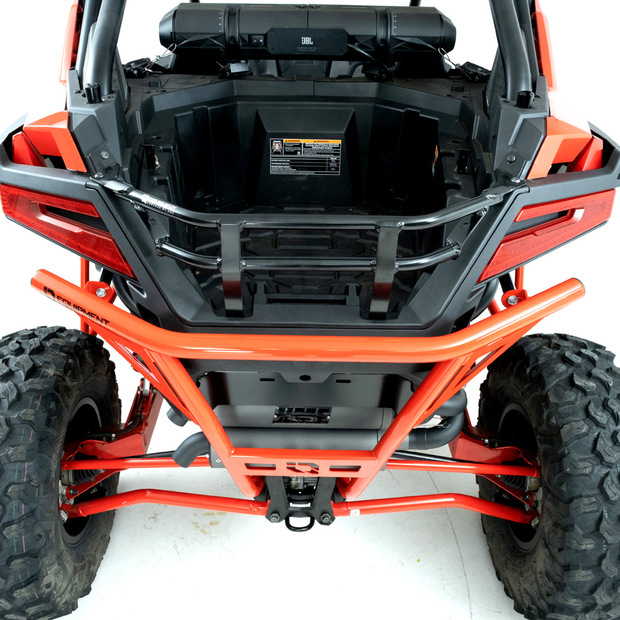 Two of the newer products we’ve added to our Equipment lineup are Exo Guards and Rock Sliders, with the RZR Pro XP® getting the full treatment. 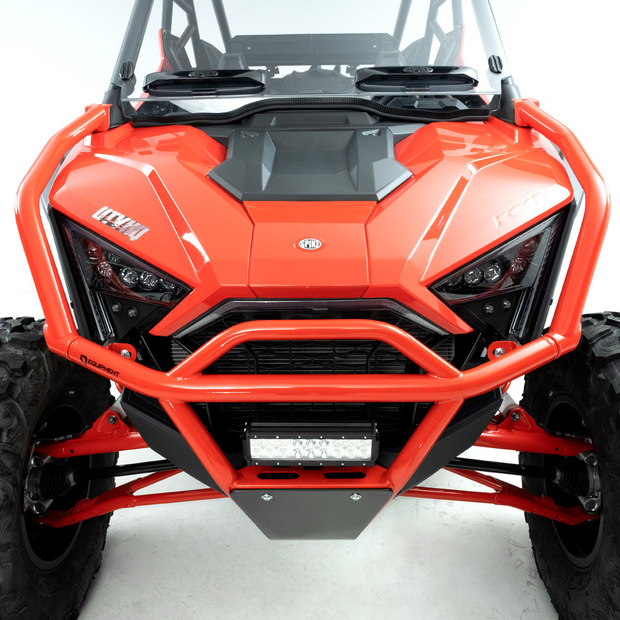 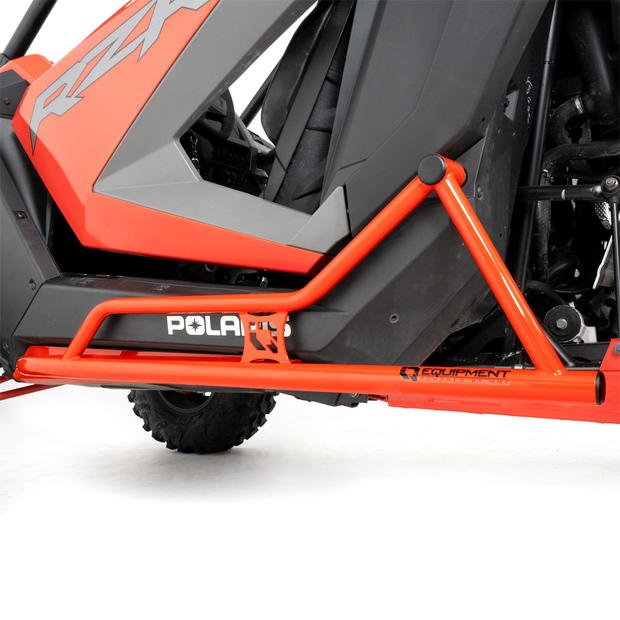 The HMF Rock Sliders for the RZR Pro XP® do everything right in one easy to install package.  Not only do these rock sliders offer side impact protection, but the base plate has been designed to wrap down and bridge the gap between the skid plate and the side of the body.   They also extend back far enough to keep the rear suspension from hanging up while still allowing for owners to install larger wheels and tires.

These days no riding trip is complete without bringing along a bunch of extra gear.  The cargo bed of the RZR Pro XP® is generous to load a ton of gear, but the open cargo area allows items to shift and potentially fall out.  Enter the HMF Rear Cargo Rack. Mounting directly to existing points on the vehicle, the Cargo Rack takes minutes to install, gives greater overall capacity, and features additional points to tie gear down. 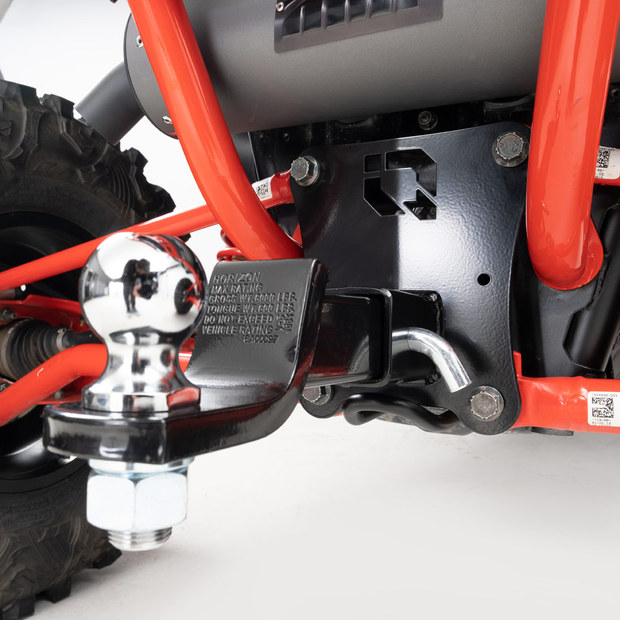 Somehow, not all side by sides come with some sort of trailer hitch.  Fix that by installing the HMF HD Receiver Hitch for the RZR Pro XP®. We built this from a 3/16” steel backplate which reinforces the rear suspension’s radius rods and weld in a full 2” receiver so you can use standard hitches and accessories.