2020 has been a strange year. I had planned to compete in the full SCORE series. So I sat out the Mint 400 because it was so close to the San Felipe 250. Little did I know that would be the last race for sometime. The Baja 500 has been dangled in front of us for a few months now, but who knows what is going to happen with it. I made the decision that I need to go race something, so Vegas to Reno it was.

I’ve only raced V2R one other time in a UTV back in ’15. I don’t know the course and the race as well as I know Baja. I also don’t set my car up for BITD rules, so I would have to race the Pro UTV Unlimited class. Although, I felt like I could still make a run at the overall UTV title. It would also be good to put a Polaris on top of the box in that class because it has been dominated by CanAm’s the past few years. I was also excited to learn that Honda would be
fielding their two much anticipated factory backed UTV’s. 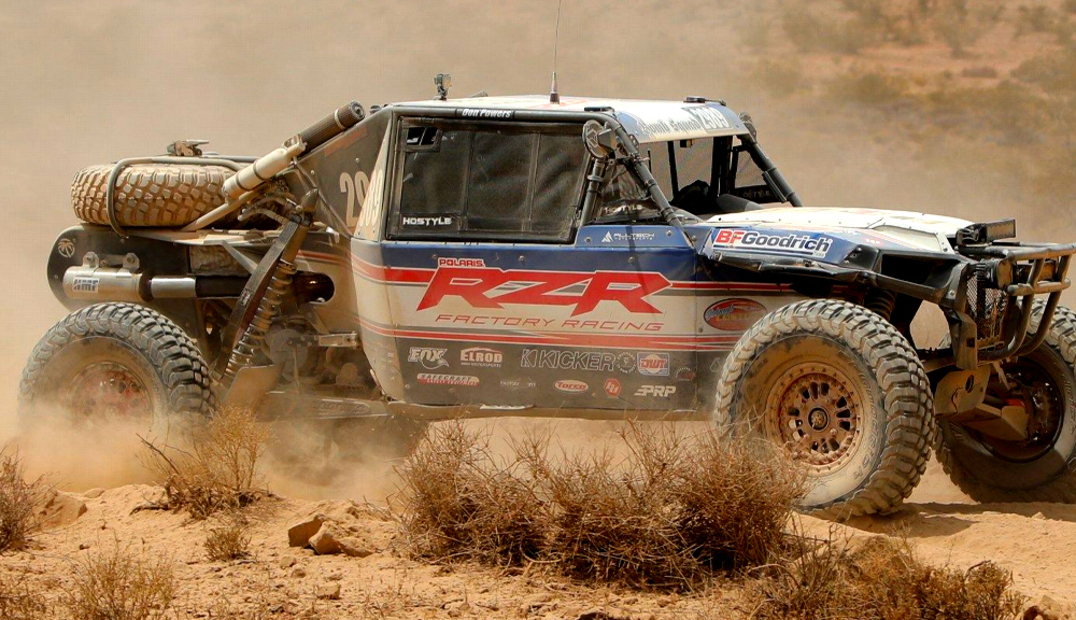 Heading into the race, I knew it would be hot and dusty in the first half of the race. As the 26th entry, I was the last car to start in my class and passing would be difficult. My plan was to be smart and methodically pick my way through the pack to about Pit 7 at Coaldale, then do what it took to win from there.

Off the start, our coolant temps immediately started to climb. The ambient temp was around 105 and there was a lot of silt that was putting a load on the motor. About 5 miles in, I lost boost. I had a sinking feeling in my stomach and was getting the feeling this was going to be a long day. I told my co-driver we were going to have to just do what we could during the heat of the day to stay close and then hopefully the car would run better once we got to some higher
elevations and the sun went down to cool the air. To my surprise, we were able to consistently move through the pack. At race mile 50, I was 3 minutes down from the leader.

The dust was extremely bad. In fact, it may have been the worst I have ever raced in. It was very difficult to see. You had to really push blindly to catch anyone and take some chance.
There were cars dropping like flies. Broken and crashed cars littered the course. We kept working through the carnage and by our first fuel stop at Pit 3, we were now 6th physical in our class and 2 minutes down on adjusted. It was only 123 miles to Pit 3 and we took more fuel than I had anticipated. I was now concerned about our next 2 legs between scheduled fuel stops because they were 151 miles and 145 miles apart. It was going to be very close on making those. I radioed our crew and decided to take a splash of fuel in-between each of them. 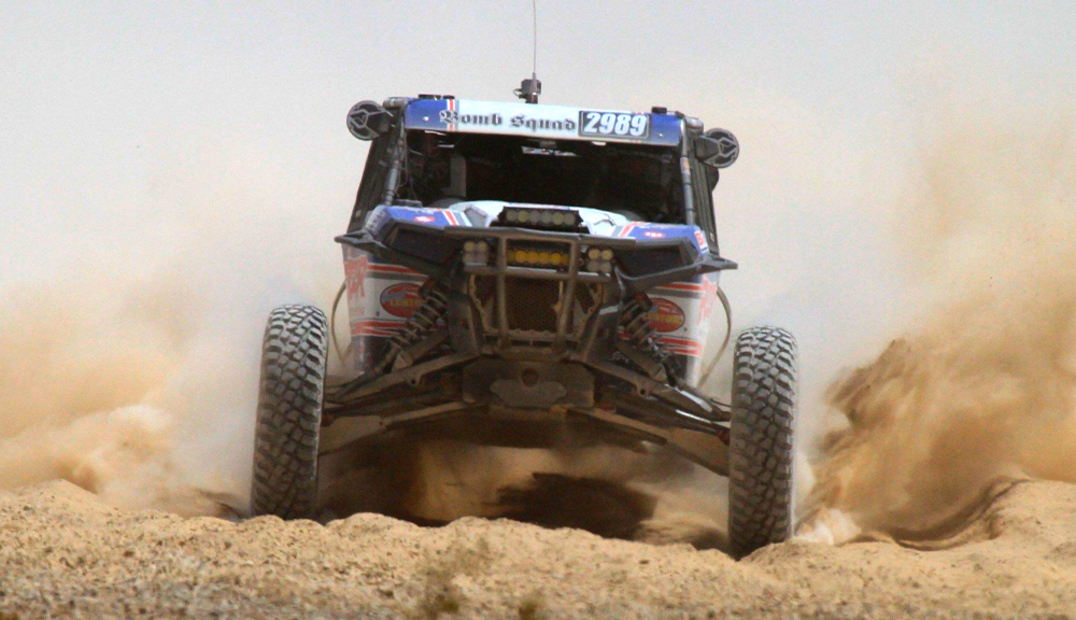 It was really frustrating driving the car without boost. We were down about 20mph from our normal top speed and it was really doggy out of the hole. The only way to make time was to carry extra speed through the corners and technical stuff. I think the dust worked to our advantage a little there because no one could really open it up since you couldn’t hardly see the course. We caught a buggy in some silt and I made a move to get around him. I shot out to the left to make the pass and as we were coming back in front of him, we clipped a ditch. For a second I thought we were done. I felt something wasn’t right and told my co-driver I think we have a flat or a broken axle. It wasn’t really too noticeable, so we kept going.

We were using a new fuel tower system for the first time. When we came into Pit 5 to take a splash of fuel, we were about 7 minutes behind the leader. Only 2 of my crew got to the pit in time, so they had some other people help them. In the rush to get us in and out of the pit, someone left our fueling air vent cap off. They radioed and told us after we had already left the pit. We went a few miles and put the cap back on. At the same time we saw that the driver’s side front axle had pulled out of the inner CV and was flopping around. Apparently the ditch had done some damage. We had clean air and I felt like we were finally able to start making some time, so I was very hesitant to stop to fix it. After contemplating it with my co-driver, we finally made the call to fix it at the next pit.

Pit 7 was a scheduled fuel stop. When we pulled in my co-driver, hopped out and helped with changing the axle. The CV was stuck in the front diff and everything was very hot. It was taking way longer than I wanted even though everyone was doing their best. While sitting there for what seemed like an eternity, I think about 15 cars passed. Once we got going, I think we ended up loosing approximately 15 minutes. When we took off, we were behind a pack of cars and the dust was ridiculous.

I was able to pick a few people here and there, but I still had a pack in front of me. Our next fuel stop was at Pit 10 and we radioed and told our crew that it was going to be crucial that they get us in and out of the pit as quickly as possible and ahead of the pack. We came into Pit 10 and my guys did an awesome job. They fueled us quickly and we jumped on course right ahead of the other cars. This was huge because it gave me clean air and I could finally start to
Push.

The class leader broke at race mile 350, I was now 3 seconds out of 1st place. Even without boost, we had a good pace going and I felt like we were making time. By mile 400, we were 3 minutes ahead.

Because I was a little concerned about our fuel economy. I told our crew I wanted to take one more splash of fuel before the finish. Pit 11 in Rawhide was a remote pit and we didn’t have anyone scheduled to be there. We had 2 chase trucks, so I told them one needed to give us fuel at Pit 12 or 13. Our crew radioed us and were concerned that they wouldn’t beat us to either pit. We finally had clean air and it actually started raining. It was funny because when we finally weren’t behind someone in dust, Mother Nature decided to water the course. I wish we had that for the first half of the race. It was even a little muddy in some spots.

We beat our crew to Pit 12 and decided to continue to Pit 13. I hoped that they would beat us there. I figured worst case that I could bum some fuel from another team. We kept a good pace and were 4 minutes in the lead by race mile 450. We lost communication with our chase trucks coming into Pit 13. We had again beat our guys there. I pulled up to a few other RZR teams and asked for fuel. To my dismay, no one had fuel. Off in the distance, I could see lights coming
so I made the decision to keep going and roll the dice on making it.

At this point, I knew we were in first but had 46 more miles to go. I drove as lightly as possible at about a quarter throttle. I could see some lights catching us, but knew that we had started last in our class and someone would have to beat us by a way to win. I also knew that most of the last 10-15 miles were downhill. In the back of my mind, I was thinking about how disappointing this was going to be if we ran out of gas. Every mile marker seemed like an eternity.

Some lights finally caught us. I wasn’t sure if it was my class or not, so I picked up the pace for a minute. I decided it was too risky to drive the car hard using more fuel. So I let the car by and figured if it was a 2900 car, I would tuck in behind it. It turned out to be Seth Quintero in a UTV Pro Production, so he didn’t matter for our class. We could finally see the lights of Dayton and the finish. I was feeling pretty good that we were going to make it. There was another UTV that we were catching. Literally a mile or two from the finish, we caught him and it was the 2929 car.

We made a pass and brought it into the finish. We crossed the line the UTV Pro Production physical leader and won on adjusted time by a little over 6 minutes.

Our Polaris RZR worked awesome as usual. We didn’t have a single flat. The BFG/Monster Seal/DWT tire and wheel combo is on point. The Fox/All Tech Motorsports tuned suspension was amazing and saved me in the blind dust a few times. It was frustrating not having the car at full speed, but I know a lot of teams battled overheating issues as well. The broken front axle was my fault, but part of the risks you take when passing in the dust. 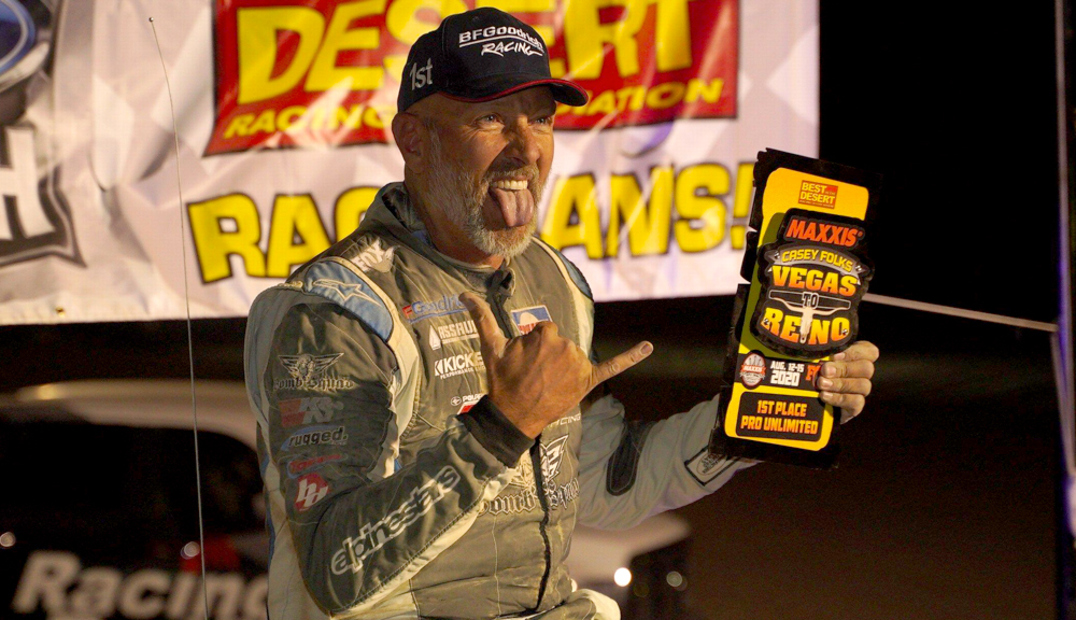 My crew and co-driver did an excellent job. Thank you to everyone for their support. I couldn’t do this without you!