Well the San Felipe 250 was a tough one, but we overcame a lot of adversity and ended up with a respectable finish and valuable championship points.

After being taken out by a broke alternator drive pulley at the Mint, I made the decision to take it off and go back to a stator. I've wanted to do this for awhile, but knew it wouldn't be easy. We have a lot of extra things that draw volts and would have to go from 150 to 75 amps. That meant making a bunch of changes with a quick turn around before San Felipe. 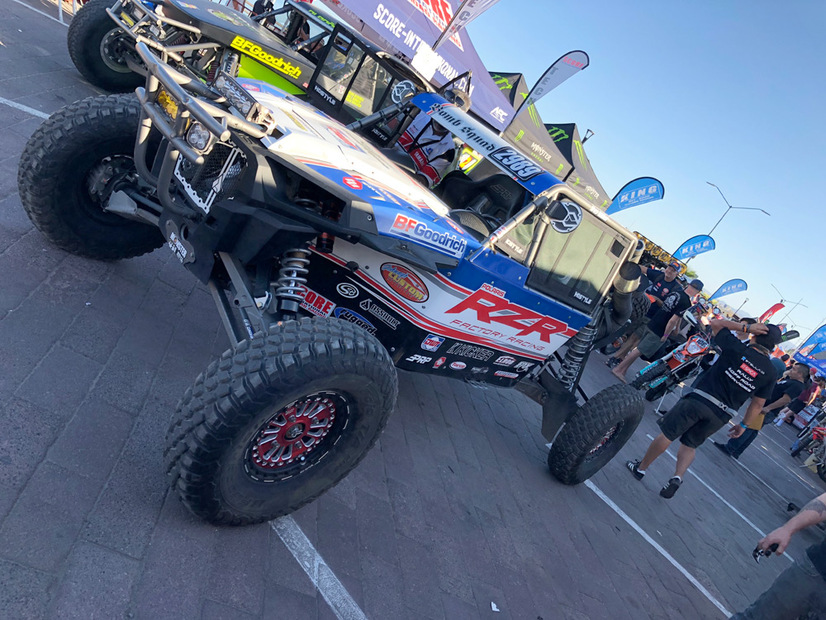 We had a few delays getting things dialed before we went down and that set us back 2 days. We ended up going down on Wednesday instead of Monday. This was going to make prerunning the course tough, but we could still pull it off. Once we got down there, I wanted to do a shakedown on the race car and fine tune clutching. Right away we noticed that the car was down on power. We quickly traced it to it not making boost. Unfortunately, we would spend 18-20 hours a day, for the next few days trying to diagnose the cause. After doing everything we could possibly think of and reaching out to numerous people, basically everyone was stumped. Finally at around 9pm on Friday night the guy that wired the car remembered that the electronic boost control power was wired with our trans cooler pump. We had shut off the trans cooler to save draw and unknowingly shut off the boost control. With that knowledge, my co-driver finished up the car by about 3am.

On Friday afternoon, I came down with a stomach bug. I have no idea how I got it. All I had ate was food and water that I brought from the US to make sure that didn't happen. By the 7pm driver's meeting, I was seriously feeling it. I ended up spending most of the night shaking and enjoying all the fun things that happen when you have a stomach sickness.

Race morning, I knew we already had some things stacked against us. We are competing for the championship, so I had the mindset of setting a conservative pace and hopefully being able to get a top 5 finish. I felt confident that we could based on the way our RZR was working and my knowledge of the course. Even though we didn't pre-run, I did on LeadNav and knew most of the good lines already.

There were 21 Pro UTV Forced Induction entries. We started 10th and everything was going good for about 5 miles. All of a sudden our coolant temps spiked and the car overheated. We could hear the fans weren't running. We tried our fan override to no avail. We needed to make adjustments, but our laptop was in Chase 1 heading to BFG Pit 1. We made some adjustments and were able to get 1 fan to run at 80%. This kept the car cool enough for us to keep going, but it ran like crap because the timing retards when it is hot.

Now my hope was to just finish. We had about 2 1/2 hours of down time, so I set a goal of getting back into the top 10. The way the car was running, I felt like we could go just fast enough to hit everything at the worst speed possible. We were getting beat to death and my stomach was no bueno. The Class 11's had already gone by and we started catching them in Matomi Wash. We caught one right at the most difficult rock section and he got hung up and blocked the only line through. We sat there for about 15 minutes as they tried to winch him every direction to get him through. He finally made it and we got by him. 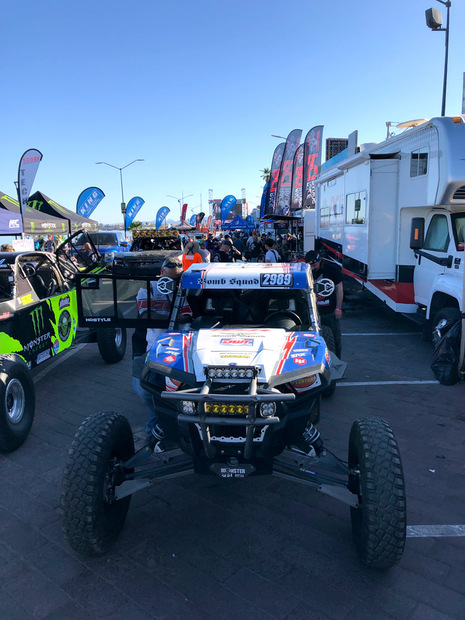 Because we were having to really manage our draw, we weren't running the fresh air. It was pretty warm and we had our shields open to let air in. We made it to Diablo Dry Lakebed and were doing around 85 mph across it. At the last second, I saw a bunch of black dots before we got pelted across the entire front of the car. I immediately knew we had hit a swarm of bees because I have had it happen before. I felt them splatter across my face and glasses, and knew there were some in my helmet. I waited to see if I got stung, but nothing happened and I didn't feel anything crawling around. A few minutes went by and then I saw a bee crawl out of my helmet and into my line of site. I had my co-driver take the wheel while I slowed and quickly took my helmet off to see how many new friends I had in there with me. I brushed them off, put my helmet back on, and got going again. Luckily, I think my beard had kept me from getting stung in the face.

There were a lot of UTV's broken down or crashed and we even started to catch and pass a few. I tried to keep count and figured we were about 12th. We kept plugging away.

This course was ridiculously rough and had an extra 100 miles. It was really taking it's toll on my body. I was achy and on the edge of vomiting most of the race. I have never felt that bad in a race before. I seriously wanted out of the car, but wasn't going to quit. Every few mile markers, I would think about how many more miles we had to go and how long it would take. When we cleared the Summit, I thought "ok, we are getting close.". But then I realized it was still 150 miles to go through some really rough terrain and how many more hours that was. It was disheartening to think I still had another 4 hours in the car.

The one bright spot was the fact that the sun had gone down. Once we got a little closer to the Sea of Cortez, the air temperature dropped and the car started running cooler. As it ran cooler, it ran better and it started to get fun to drive again. This put a little wind in my sails. We cleared BFG Pit 2 and passed 2 more UTV's. I figured we were now in the top 10. From Check 3 to the finish I could see the light at the end of the tunnel. I put the hammer down and was actually having some fun again. This RZR works so well and is awesome to drive when everything is working. We passed a few more cars and another UTV on the way to the finish.
We ended up finishing 8th in class. With the way things started and everything we went through to get there, I feel that was all we could ask.

There was a ton of hard work and long hours put into this event. I really have to thank my co-driver, Donny Powers and Johnny Lehr-Webster from Johnny's Custom Motorsports for the countless hours spent on the car. I also want to thank Wes Elrod and Elrod Motorsports for their help and letting us prep the RZR at their shop. And obviously, none of this would be possible without the support of all the people and companies that back us. Our pit crew of Shane and Dominic Knuckles, Nick and Paulina Nelson, and Trino Padilla did a great job. Thank you so much for everything!

We have a little over 6 weeks until we leave for the Baja 500 and I can't wait. We know exactly what we need to do and have a plan to make it happen. We will be ready for the 500 and will compete for the win there.